'The Purple Envelope' by Twishmay Shankar

"Would that be all, Sir?”, asked the waiter. 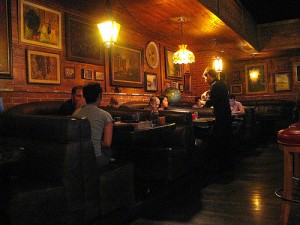 Keith nodded. He had been waiting for an hour now. His eyes were tired and dreamy. They drifted across the paintings on the restaurant wall and settled on a stream of starry light coming from a distant grand chandelier. It reminded him of her starry eyes. He had not seen Michelle in the past twelve months. After breaking up almost a year ago, they had never met, never even kept in touch. But that very morning, Michelle had texted him out of the blue. “Keith, I want to meet you today. Meet me at Blueberry Truffle at seven. Please be there on time. From: Michelle.”

He had dreamt about her the previous night but could not recall it now. “Merely a coincidence? Why does she want to meet me now?” - He had been thinking all day but no satisfactory explanation greeted him. He sat there waiting, wondering if he still fancied her.

His thoughts were interrupted by the sight of a beautiful maiden in a fancy red dress. She looked worried and walked fast. He could not recognize her at first. But Michelle sat on his table and spoke.
“Sorry I’m late. But it will only take fifteen minutes. I have a letter to give you.” She started sifting through her handbag. Seconds later, a purple envelope flashed in her hand.
"Keith, here is the letter. I can't let you read it right now. I will give it to you when I leave.”

He wondered if her voice had changed but he could not remember how it had been. He tried to recall why they had fought but nothing came to his mind. Suddenly, he felt a rage building up inside him. Was it because he hated her so much, he thought, or was it because he still loved her? Was it the same feeling anyway? His mind quickly suppressed the disturbing thoughts which followed. He stared blankly at how a brown fringe partially covered her thin face. He noticed how her hand cleared it and then he spoke.
"Whats in the letter? And why are you in such a hurry?"
"Keith, it has been a year. I still can’t forget you. I keep thinking about you. I hated you when we broke up. People told me it is only a matter of time. Months have passed by but I still cannot ..."

The waiter approaching their table interrupted her. He laid out the two coffee cups in front of Keith.

"Sir, would you have anything else?”, asked the waiter.
"Michele, is that all you’ll have?”
She responded with a subtle nod.
“Yes, that would be all", Keith confirmed.

The waiter kept staring with an unspoken question in his eyes. He walked away with a perplexed look on his face. Keith wondered why, but another flurry of soft spoken words interrupted his thoughts.

Keith kept starting. Michelle did not wait for an answer.

“Keith, we never love people for what they are. We love their impressions in our minds. Sometimes, life makes us realize how those impressions are unrealistic. We should accept this and move on. But I can’t let go of your impression. I talk to him all the time now. The worst part of this is you were never like him. In a sense, he is perfect. He is all that I ever wanted you to be. I came here to check if you’re anything like him. I couldn’t resist. Have you ever felt the same? Tell me please. Have you ever talked to me in your mind?”

"I don't know Michelle. I really can't say the same. I did miss you at times over the past year. But all this sounds crazy. I never saw you in my head. I liked you for what you were and not the impression you created in my mind."

Keith looked at her. She looked gorgeous in that red dress. Her expressive eyes had spoken much more than her words. “Do I still see her in my mind?”, he wondered, when a scene from the dream last night flashed by. “Déjà vu”, he thought. Sitting across the table, there she was, the perfect Michelle he had always dreamt about. He realized he still missed her and wanted to tell her. But she interrupted him.

She did not listen. Keith followed her as she got up from her chair and started walking towards the door. A strange look covered the guards face when he opened the door for her. But she smiled and that was all Keith cared for. Once at the road, she signaled for a taxi. A yellow cab stopped by and she stepped inside it.

The taxi had started moving when Keith thought about the letter, the purple envelope. She had forgotten to give it to him. She almost read his mind and shouted.

"The letter is in the restaurant at our table. Bye Keith. I am leaving, forever."

The implications of her last few words dawned upon Keith. He stopped waving and sprinted towards the restaurant. Slamming through the front door, he ran towards the table. The waiter had just finished cleaning their table.

"Waiter, was there an envelope on this table?"

The waiter stared blankly. Had he thrown away the envelope? Keith’s heart stopped beating as he clarified.

“The lady with me tonight left an envelope here. A purple envelope."

“Which lady?”, asked the waiter.

"The lady in the red dress. She was with me at this table tonight"

The waiter's face turned grim. He looked into Keith's dreamy eyes and spoke in a sympathetic tone:
“Sir, you were sitting on this table all alone."

(Written by Twishmay Shankar, for Nascent Emissions. You can read more posts by him at his blog, My Life, The Universe and Everything)
Posted by Saumya Kulshreshtha at 1:48 AM