I started putting out my favourite poems across social platforms about 10 days ago, in a series called #100DaysOfPoetry. The reason was simple - the innate need to share which impacts you deeply, with a hope that it manages to impact and connect with a few more humans in the same manner. I was pleasantly surprised with the response this little daily initiative generated. On last count, four other friends had started sharing their favourite poems in a similar series.

This seemingly small number also feels grand, because it comes as a good answer for all those who consider poetry esoteric, elite and unreachable. It helps us know what people like us are connecting with. It helps us read great, time-tested poetry, in a period where all of us are just spewing out words under the delusion of being great writers ourselves. Don't get me wrong - I have no problem with people believing they can be great writers. My only problem is with poor reading, and lack of a desire to learn and know from where emerges our heritage of poetry.

So, while the series goes on, I also want to catalogue and chronicle the poems somewhere, lest I forget all the great words and great artists I came in touch with. Here are the first 10 of the poems I shared, compiled for a heart-warming reading rendezvous.

1. Dylan Thomas - 'Do not go gentle into that good night'

Poet - Dylan Thomas was a Welsh poet, and also an extraordinary orator. He died prematurely, at the young age of 39. In this short life, he had acquired fame for poetry, and ignominy for his extreme drinking habits. Popular opinion remembered him as 'roistering, drunken and doomed poet', and while critics remain divided on how brilliant or abysmal his poetry is - I remain in love with two of his works. The one pasted below, and another titled, 'And death shall have no dominion'. 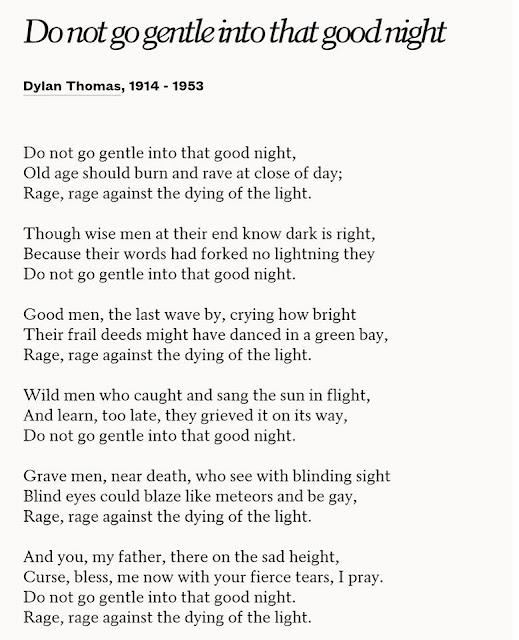 2. Pablo Neruda - 'We have lost even this twilight'

Context - When I am even slightly mushy, and I want to read something which I know for sure will hit my heart, I randomly pick up Neruda. He never disappoints.

Poet - Neruda was a Chilean poet, politician and diplomat. Interestingly, Pablo Neruda was only his pen name, but he later legalised this into his official name. His most beautiful collection of poems is in a book called 'Twenty Love Poems and a Song of Despair', and I cannot thank Dr. Saif Mahmood (Saif bhaiya to me), for gifting it to me last Diwali. Melancholy, love and eroticism effortlessly combine into his poetry, and dissolve into the soul of the reader.

Takeaway - Vivid images and this warm, but sad feeling of love inside my heart. I draw no meanings from Neruda's poetry. I draw only love. And a calming despair. 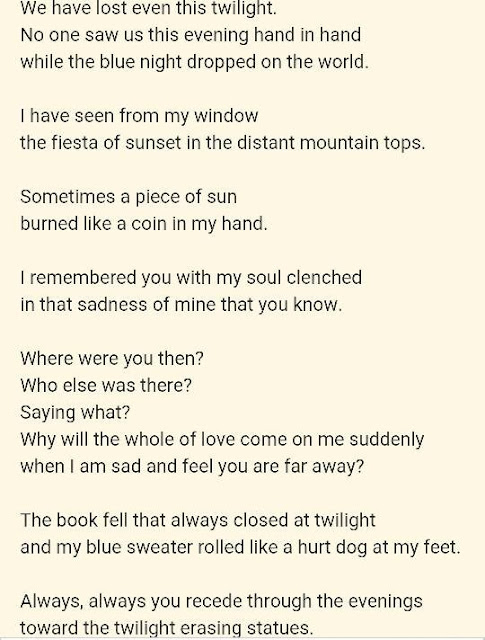 Context - Chanced upon it some months ago. Kept it close to myself. Stumbled upon it just in time for sharing.

Poet - I do not know much about him, except I know he is a contemporary poet and a product of digital postmodernism. He posts his poems on Instagram and has a steady following. Also, I discovered I have a common contact with him, and hence, I am dying to invite him to a future edition of a PC meet up!

Takeaway - The precision in the thought that 'lonely will always love you more'. 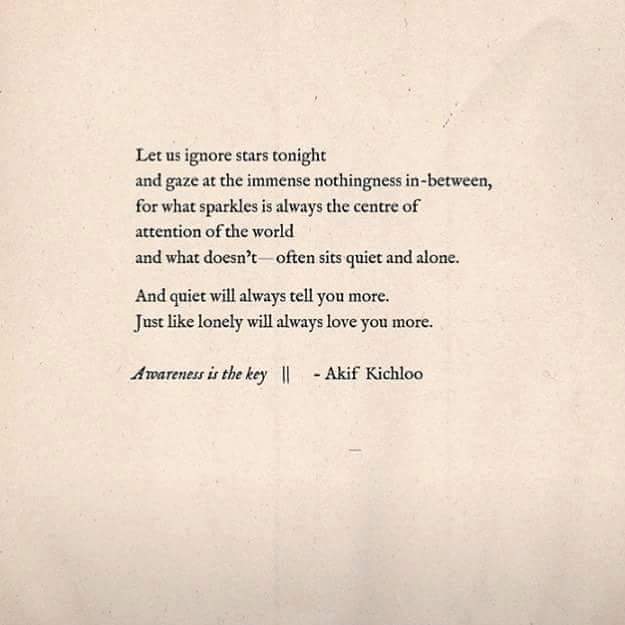 4. Strickland Gillilan - 'Watch Yourself Go By'

Context - I have no idea where and when I learnt this poem, but it has been a part of my childhood. For the longest time, I did not even know the name of the poet, but this was a good way of discovering.

Poet - Gillilan is an American poet. Other than that, I have zero knowledge of him!

Takeaway - It helps sometimes to step out of your skin and see yourself as others would. Not to create pressure, but just to gain perspective to oneself. Try it. 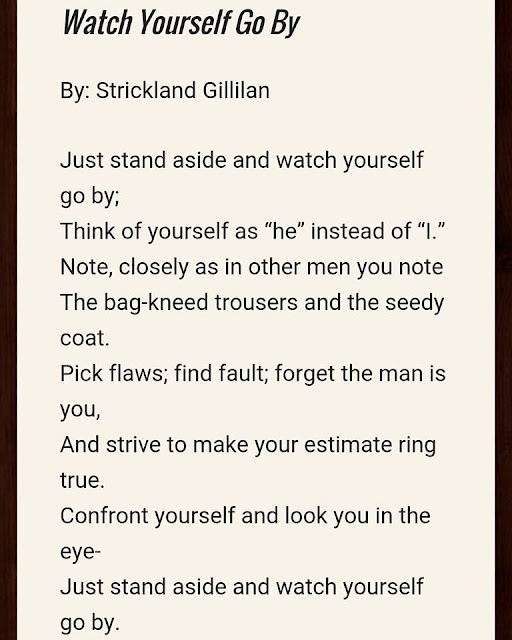 Context - 'Dead Poets' Society', what else? Duh! Immortal lines from a poet made immortal by an immortal movie.

Poet - One of America's all time greatest poets, and a trailblazer himself. Sample his poems, any. If you're lost, pick up a copy of 'Leaves of Grass' and lose yourself to the 'power' of his words. His words are literally powerful, and that is why he ruled over 19th century poetry. Most importantly, he understood and advocated for a relationship between poetry and society, both potent of affecting each other positively.

Takeaway - Reliving that last scene and feeling vigour run in my veins as I read it aloud to myself. Poetry is meant to be read aloud. Inspiring generations to action. 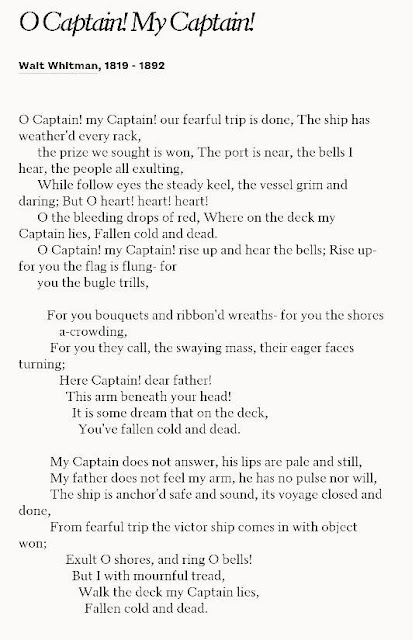 Context - I had picked up Merchant's anthology, called 'Sufiana', which compiled his poems written at different times in life. This poem, titled 'Poem', comes from there.

Poet - Hoshang Merchant is an Indian English language poet, born, curiously, in the year 1947. About a year or more ago, I had heard him recite in the India International Centre, and I remember being serenaded by both, his presence and his recitation. I later learnt he is gay, and has edited India's first anthology of gay writings. Reading him left on me the impression of a poet rather well read himself, functioning within the strains of memory, identity and history - the rubric of postcolonial writings.

Takeaway - Look at the imagery. Look at how the physical transcends to emotional, and leaves a sort of spiritual satisfaction in completing that journey to the earth. 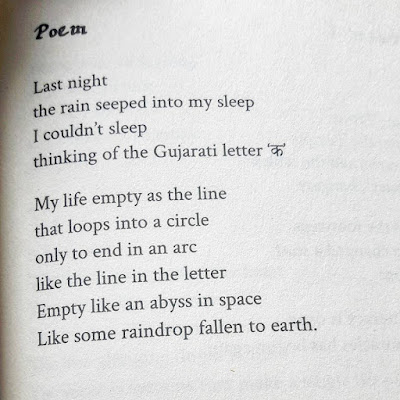 7. Thomas Hardy - 'A Confession to a Friend in Trouble'

Poet - I could never cope with Hardy as a novelist, and had no inkling he wrote such wonderful poetry! Hardy the poet proved to be better than Hardy the novelist. His Victorian realism remains a struggle, but his poetry found a smooth way to my heart.

Takeaway - I am analysing that still, but even at first reading, the poem left on me an impact of strength and hope. 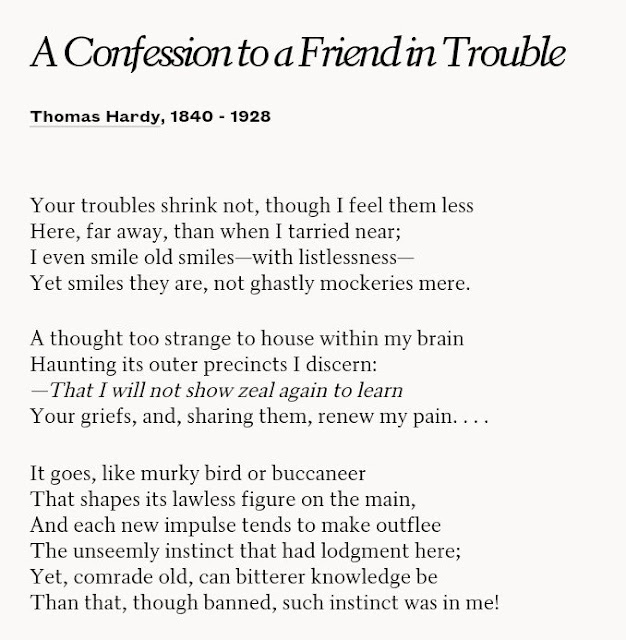 8. William Wordsworth - 'She dwelt among the untrodden ways'

Context - The Lucy poems are among my all time favourite and I often catch myself reciting them. Unaware. Like an old childhood melody. This poem just popped in mind.

Poet - Wordsworth is, of course, the great Romantic poet. He is my favourite among all the Romantics, a view not favoured by the well-read and well-informed literary enthusiasts, but I cannot help falling for his simplicity time and time again. Nature, love, emotions find easy expressions in his poetry, and what I connect with is the nurturing solitude which recurs in his poems - as if worldly engagements are a contamination poets must necessarily keep away from. 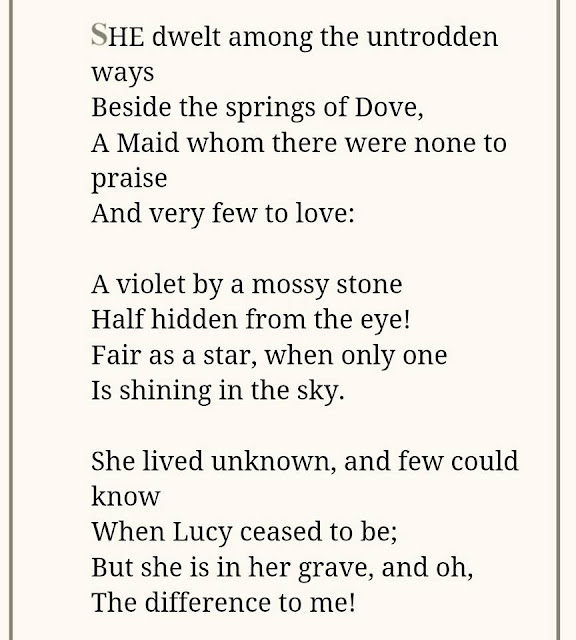 9. Elizabeth Bishop - 'The art of losing'

Context - Shared by Supriya Kaur Dhaliwal, a wonderful poetess herself, who began her #100DaysOfPoetry series with this!

Takeaway - I once read that you are not made by the things you have, but the things you missed. This poem reminded me of that, and the depths to which art makes you go and investigate, even at the cost of generating chaos. 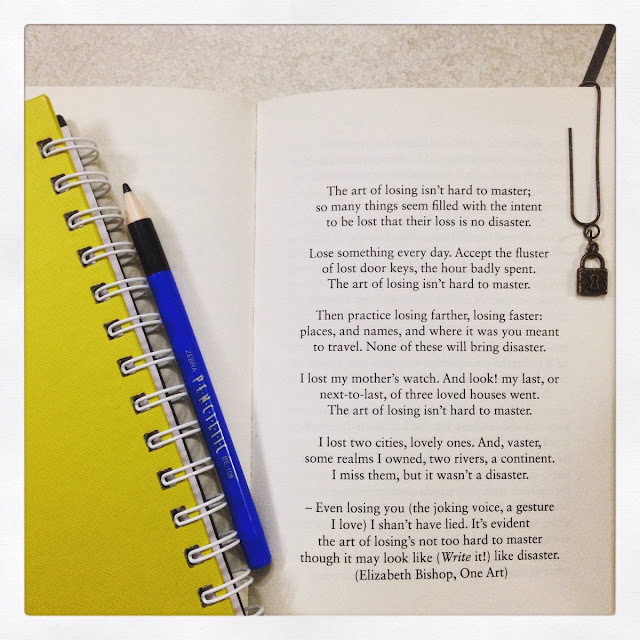 Context - Rains! Random reading up on poetry on the rains led me to this beauty.

Poet - Not even 10 days and Whitman is back on my list! Read up on him in poet number 5.

Takeaway - An enhanced beauty of rains :) 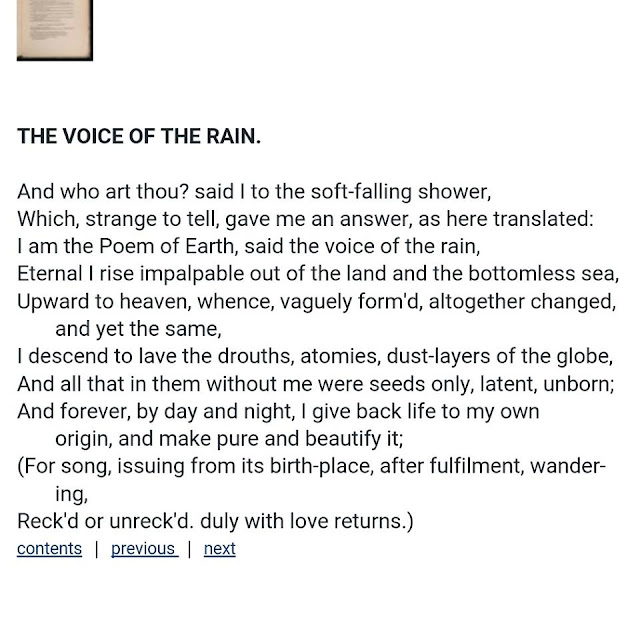 Posted by Saumya Kulshreshtha at 5:29 PM No comments: Links to this post

I was one among the 4 individuals who features in the Sunday Magazine of the Indian Express, which talks about the liberalization generation and their choices, pressures and aspirations. In a conversation which stretched over a couple of days, many things became apparent to me as I spoke to Ankita, who asked incisive questions to put her story together. Titled, 'The Winner Takes It All', the page long story brings out the concerns and comforts of our generation, which evolved alongside the Economic Reforms to which our country owes much of its present shape. You can read the whole story here - http://indianexpress.com/article/lifestyle/life-style/the-winner-takes-it-all-2931791/ - and it was a privilege to be featured alongside my friend - Akshat Mittal, whose comment on how our generation has the ability to convert passions into professions was my pick of the lot.

While talking to Ankita, I realised, how fortunate are we to belong to our times. We do have our share of pressures, but the opportunity to exist as unique individuals is overwhelming, and available to all. The internet and social spaces have eliminated any filtering interface, which makes it that much easier to build ourselves into a version of our Visions. The opportunity is democratic - the skill and perseverance is the differentiator. Our aspirations are set high, and hence our focus must be set higher. The perils are there - too much interactivity, too many choices, too much distraction, too much pressure (active and passive both) - but the deterrents (and deterring addictions) have existed in all ages, and so shall they continue to. The point I am trying to make is, anytime someone tries to talk to me about social media as taking away from reality - I have scores of examples to quote where digital has been used (exploited) to create, curate and inspire real experiences. Secondly, it is time we understood virtual experiences as a part of our reality - enriching, informing, integrating and entertaining. And thirdly, if there are individuals who prefer a virtual existence to real - I'd like them to have it. Digital-social spaces have been empowering for people whose physical participation was often unconsciously discriminatory. Persons with Disabilities are a case in point.

The space to exist is huge. The chance to construct our dreams is tremendous. The power to bring people together is unprecedented. And the opportunity to just be ourselves, assertively firm and fluidly evolving, is overwhelming. Your struggle - to find who you are, what drives you, what lends you happiness, and what do your doggedly dream of.

There. For more perspectives, hop onto the Indian Express link and read on!

Posted by Saumya Kulshreshtha at 1:26 AM No comments: Links to this post

Her words
The ones she had borrowed
From love
Life
And literature
Left my palms aglow
As I rubbed them softly
Between my hands
Firmly pressing them into
The meandering lines of destiny
Filling up the cracks
Caused by an undone future.

The haste of chronicling
Her unbridled, scattered utterances
Dried up all ink I carried
But the nib continued scratching
Invisible letters
I later caressed
And comforted with my fingers
Sans comprehension.

Am I supposed to get meanings,
Or intents?
Am I to follow language,
Or expression?
Am I to catch words,
Or flow with the flow?
Am I to find myself whole,
Or scattered in fragments of her story?

The language of love
And of literature
Often leaves a true student illiterate.

Posted by Saumya Kulshreshtha at 12:49 AM 2 comments: Links to this post