Let's Grow Up Together

You're growing up into a terribly demanding kid. Kid, yes. You're that insistent, even nagging, and you cannot, just cannot stand any lack of attention from those who nurture you. I am a case in point. At the conclusion of your tenth edition, I had made a promise to myself, that for about a month and a half, I will maintain a safe, sane distance from you. But then, you crept into my dream, as a definite vision of what could a perfect incarnation of yours look like, and I jumped right back in. You see, I like holding your hand and leading you there, there where we all imagine you should be. I am privileged you grip my hand right back, and trust me. And then we travel together, in a caravan, of course, of a growing urban tribe of poets, and arrive at surreal junctions like the one which just went by. Lets talk a little about it to each other, shall we?

I was talking about you to Navin ji the other day, and one thing we concluded was that your setting this time was impeccable. Karan Bhola and Cheistha Kochhar need to be thanked for allowing us to meet you in the amazing, pristine, beautiful Sri Aurobindo Centre for Arts and Communication, which also serves as the Young India Fellowship Programme campus. It was green, and of course, that made our already hyper, young environmentalist, Aavika, chirp even louder with glee. We expected it, of course. That is one of the cooler things about you PACH. Your family has members who are known by their distinctive traits, distinctive preoccupations, distinctive inspirations and styles and perspectives on life - but they all seamlessly blend together to make you into the vibrant tapestry of gem-like thoughts. Hell yes, you're studded with all precious, not semi-precious, ideas, which are brought to table by people who dwell on comics, superheroes, first crushes, unrequited love experiences, nature, creatures, languages, family, bonds, individualism, devotion and innumerable other incongruous, yet complimentary motivations. You, its all you PACH.

Do you know the best thing about being where we were? The fact that we were under an open sky, not bound by any space. I could, for once, see poets relax, find their own comfort zones, walk around, freshen up their thoughts, loosen up their bodies and drink in both the chill and the sun with equal alacrity. May be you should always call us to places like this - which are free, so our thoughts could travel free. Well, poetry is a medium of travelling, to distant lands, to hearts of people - and this, of course, I learnt from Ekanksha, in an exquisitely worded introduction. Oh, introductions are the special things about you. People like talking about themselves, we love hearing about them - it all just adds up perfectly. PACH, perfection is boring. Don't be perfect - just always be better than what you were the day before. It has kind of been the trend so far, so, lets not pressurize you in that direction.

Three huge paragraphs, and I have not even arrived at the point, the pivot, the peak, the prime reason why this PACH was a touch above from the others. Actually, leaps and bounds ahead of all previous ones. This reason is a name - Ashok Chakradhar. A poet who is an institution in himself. While anticipating his arrival, we were hoping to meet a celebrity, one who would enamour us, meeting whom was what our collective dreams were made of. However, the actual tryst with him proved to be astonishing and humbling, both at once. In him, we met a listener, a poet and a teacher - not a celebrity. He came, he became a part of you PACH - and he took keen interest in both, knowing you and commenting on you. All good comments, goes without saying. 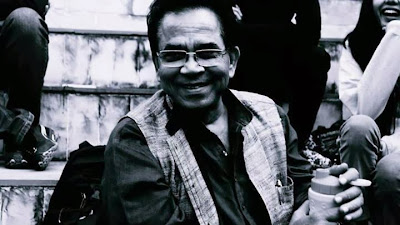 Chakradhar sir was eager to listen, laugh and appreciate. Whether it was Govind narrating his love story in broken Hindi, or Dipalie finding solace and silence in her beloved's grace; whether it was Mago's poem which tickled Newton and Einstein, or Anup's ingenious, rhythmic verses giving brief lessons on living - Ashok ji heard them all with interest and enthusiasm. Aditya's ghazal needs no commenting upon anymore. Aavika, our little environmentalist, impressed Ashok ji with her naughty Sunday song, dedicated to an imagined lover. I had a short vain moment when Ashok ji appreciated Daastaan, the poem closest to my heart after 'A Thousand Times Over'. He mentioned something about having tears in his eyes after my recitation, but I will let that pass, lest I not be able to control this pride knocking so firmly on my door. The true show-stealer, however, was this poet who calls himself 'Umar'. His poetic dimension was so well hidden from me, that to this day I marvel and sense disbelief in my heart regarding it. While Ashok ji, but obviously, was mighty impressed with his compositions, I could only let my tears lose in response. His words were filling me up so much, that I actually wanted him to stop! Now that, PACH, is something new I experienced.

Ashok ji himself couldn't hold back, and he recited something in front of us which the world as yet does not know about. I'll keep the specifics of the composition to myself, since all my letters to you PACH are sort of a public affair, but what I will let out is that in my view, his poem was a PACH epic. It was long, but it only kept getting better with each succeeding part. The tone, the rhythm, the vocabulary and the recitation - each was a lesson, each leaving us absolutely bewildered. I felt certain emotions the dictionary has no terms for - and I know for a fact that I share this bewilderment with you PACH. There is no way you do not understand this feeling. Sir was full of grace, humility and the lasting image I will carry of his will be that of a teacher sitting in the midst of 35 odd students, teaching them about Abhida, Lakshana and Vyanjana...

And the shawl! Looked so perfect on him. You do very well know how much more I want to talk about Ashok sir, but then, there are other poets I MUST make a mention of. 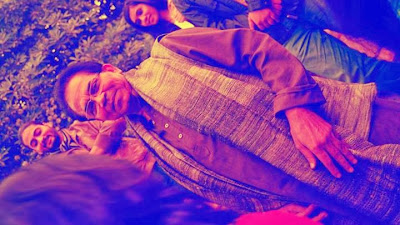 Dipalie said something very intriguing and remarkable about you PACH. She said, if the air around and within you is canned and carried to different places, will creative genies cast their spells on everyone they come in contact with? Essentially, she was giving voice to the shock and awe I experience when first time poets, or people who are still nascent in this realm of writing churn out completely incredible, top level verses. I mean, so many have come to your gatherings admitting that they never write, of if they write they don't write in a particular language, and that they don't share their creations with anyone or in public. Now, how many of those very people have gifted you surreal words and expressions you want to neatly and carefully compile together in a treasure trove of poems which will undoubtedly leave the world stunned? The number is too good to be true.

When we last met you PACH, people shared too much. Right from the beginning, where Ekanksha put our day long journey on the perfect track, till the very end, by those melodies stolen from Rafi sahab and Jagjit ji's corpus, each moment you breathed, I lived a little more. The Elephant in the Room, by Vaishali, left a giant impact on each heart. Navin ji's reflections on truth, which went from lived experiences, to philosophical abstractions to realistic deconstructions was akin to a compilation drawn from our collective childhood. Jyoti and Anup's duet was soft, lyrical, lilting. Anurag's composition reflected mature thoughts and word usage. Neha's poem, read in absentia, was rich with genuine devotion expressed in unforgettable phrases. Mansi always adds that spontaneity and ebullience to the group. Ghosts of Neha Bawa's past still haunt my heart. Iti, demure and dignified, touched each soul with her ode to the most special, umbilical bond which life grants us.

And, even though I feel out of breath recollecting such vast list of poem, each uniquely special and remembered by me, I cannot help but make a distinct mention of Kamal, whose poem was so amazing, that I cannot even begin to describe it in words. "Hum Aapki Kyun Karein?" is a simple question, but demands some understandably difficult answers. I want a larger world to read that poem, PACH - it had so many echoes which have so far only reverberated within the walls of heart. I invited him as the next guest blogger on Nascent Emissions - I think he will agree.

All these, each one of these, make you so special. PACH, you cannot be a lifeless concept. You are growing, one meet at a time. The pace of your growth has been scary, but hey, some crazy magic works here, remember?

Winters are here. Let's promise each other some warmth and some awesome balmy days we spend holding each other's hands.

With love and bright hopes for future,

PS - I have to admit, that at times, so much happens during a single PACH meet, that I find myself incapable to registering and processing it all. It is for this reason that writing these letters is so important for me. This is where it all sinks in. This is all like being in love. For so many of us.

Posted by Saumya Kulshreshtha at 5:32 AM