So, on 18th July, 2016, I began this series called #100DaysOfPoetry, and decided that I am going to collate the individual poems here in sets of 10.

Context - I studied this during my Masters in Jamia, and instantly fell in love with this love which is beyond cartographic definitions.

Poet - Among the greatest of metaphysical poets, John Donne is also remembered for his profound prose. He was the master of 'conceits', which are a category of metaphors where the comparison is rather abstract. In fact, Helen Gardner has famously commented on conceits by calling them a 'comparison whose ingenuity is more striking than their justness.'

Takeaway - The beautiful notion that when you are with your lover, your world converges in the little space you inhabit. 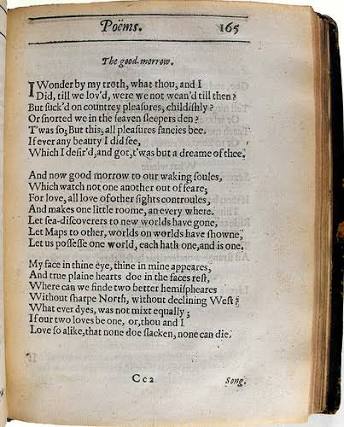 Context - I found this hidden away in this amazing book called 'Poetry Please', which is a collection of the 100 popular poems from BBC Radio 4 programme.

Poet - Cecil Day Lewis has held the distinction of being the Poet Laureate of UK. A 20th century poet, he is of Anglo-Irish origins. If you have ever heard the name Nicholas Blake - the author of detective novels, he is the same guy. Till date, he is remembered as a voice of revolution in poetry and politics.

Takeaway - The last line - "And love is proved in the letting go." 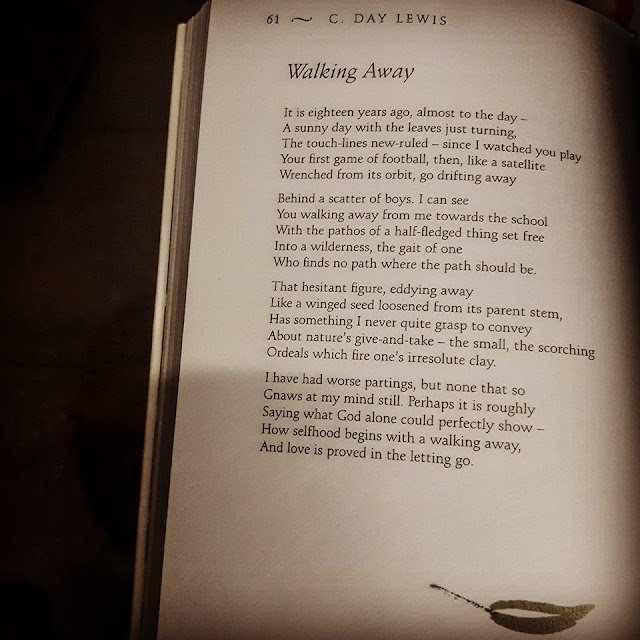 Poet - A Kashmiri poet, Agha Shahid Ali is a dear, favourite voice from the postcolonial corpus. His poems smell of nostalgia, of a lost land, of lost culture, of despair, of identity, of conflict and seamlessly blend traditional notions with modern connotations. He is credited with giving ghazals their just place in English language. And I can go on about him,

Takeaway - Each couplet in this poem is a discourse in itself. The poem in the attached image is incomplete - find a version which has the epigraph. This is a ghazal in English, following each rule by the book of the Persian poetic form. And it is beautiful. So beautiful. By the way, can you figure out who is the narrator in this poem? 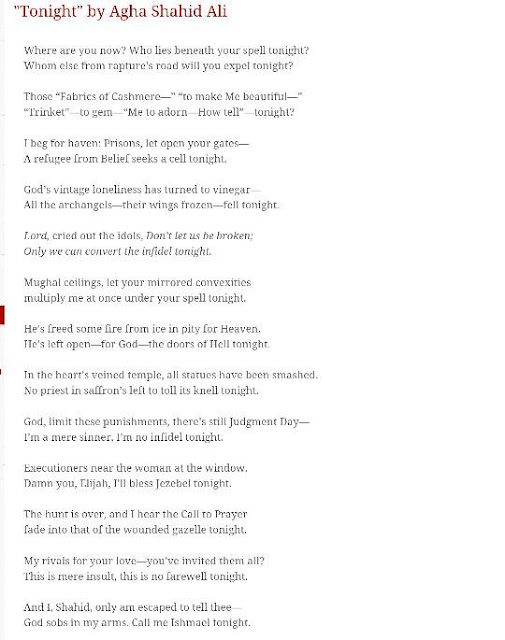 Context - Judith Wright lay on the unexplored terrain of poets for me, especially since the first poem I read of hers was supposedly a 'ghazal', and it just did not seem to be one. That put me off. Rediscovery began with this poem.

Poet - Wright is an Australian poet and environmentalist. Among her poems, 'Woman to Man' has the most hallowed status. And rest, I am still exploring.

Takeaway - The subtle sensitivities of relationships encased in-between the words. Oh so nice! 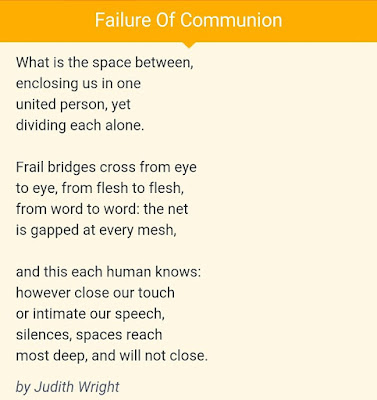 Context - Stumbled upon it while randomly googling Margaret Atwood poems. (Yes, I do that.)

Poet - Atwood is a contemporary legend. On her recent visit to Delhi, she has been known to cause a stampede. Of Canadian origins, she dons many hats - poet, environmentalist, novelist, critic etc. Handmaid's Tale is perhaps her most read work.

Takeaway - Stoicism. That is my takeaway. What is yours? 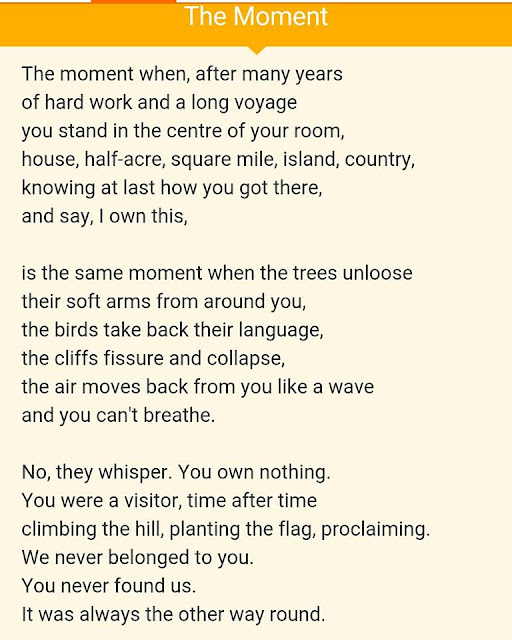 Context - Among love lyric, this has been in my imagination since much before I can recall. Many writing exercises have begun with these oft-quoted words.

Poet - Byron is a Romantic poet, and also the genesis point of the term 'Byronic Hero' - the charming recluse, or the tortured charmer. Byron himself, being a Romantic poet, dwelt extensively on the theme of 'nature' and its dichotomy with civilization and urban living. Nature, while being used to evoke metaphors, was also the all powerful entity, and an apt companion for humanity.

Takeaway - Beauty, and a companion for lovelorn nocturnal readings. 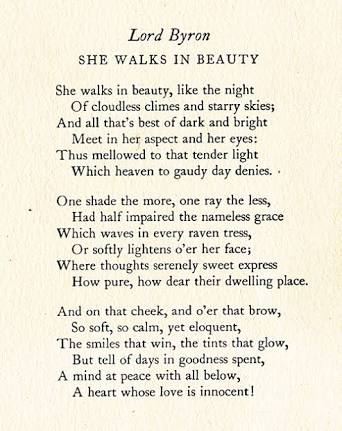 Context - I just needed a nice 'good night' wish to send across to a friend and was reminded of this.

Poet - Another Romantic poet. Like fellow Romantics, he too dwelt deeply on the power of nature, and in addition, the power of human intellect. He saw the poet as a seer, a commentator and a visionary.

Takeaway - Thinking what is a 'good night' for me. 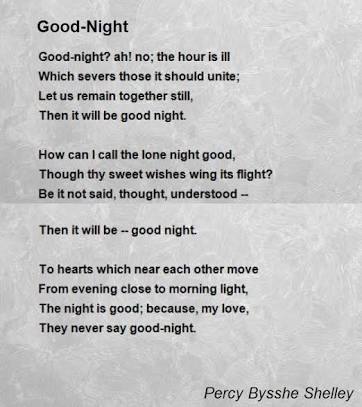 Context - This has been a poem which is close to my heart for its simplicity and for being a literal specimen of meaning lying 'between the lines' and hidden along punctuations.

Poet - cummings is remembered for his eccentric usage of punctuations - you'll find no use of capitals, abrupt parentheses, lines beginning after gaps - and this was not all random. Meanings, gaps, emotions could be located in the way the words were arranged. Though inspired by the avant-garde style, much of the content of his poems is traditional.

Takeaway - Simplicity and universal assertions on love. Carrying your beloved's heart in yours, firmly, carefully. 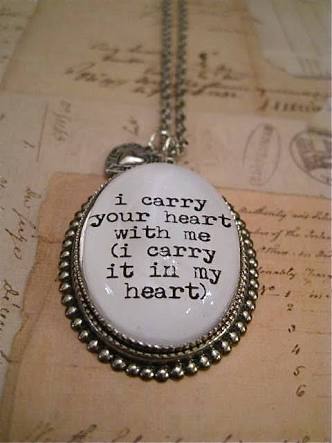 Poet - Frank O'Hara is an American critic, writer and poet. Interestingly, his work is inspired by Jazz, surrealism and abstract art.

Takeaway - O'Hara wrote many poems to Ashbery, his friend of 20 years, whom he affectionately called 'Ashes'. This one was penned in 1954, and here he imagines them both reading this together like a pair of ancient Chinese poets. 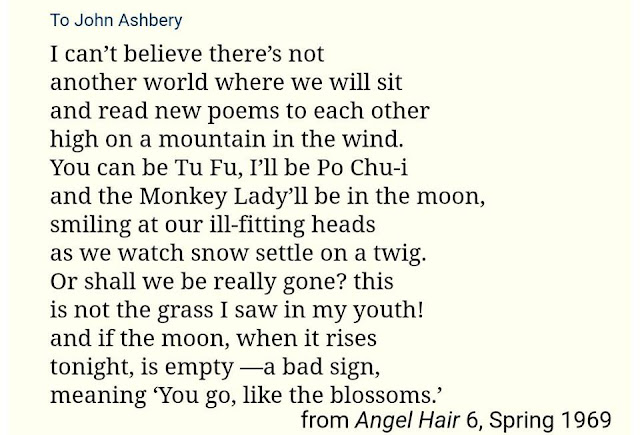 Context - I cannot stop being inspired by the Romantics, can I? Late night Twitter scrolling led me here.

Poet - Keats is, again, Romantic. And he propounded the 'negative capability' theory of poets, of which I am such a fan.

Takeaway - He calls 'imagination' truthful. Can you see how subversive and beautiful is it at the same time? Posted by Saumya Kulshreshtha at 12:12 AM