The Lore of Dungri-Garasiya Bhils 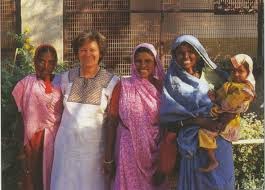 Marija Sres was a name I was not familiar with till about three days ago. Today, three days later, it is a name which has begun commanding decent amounts of respect from me. A religious sister, she came to work with the rural population of India and succeeded in impacting not just the spiritual and economic lifestyles of people by understanding their core problems; but also left an indelible mark on the literary landscape of Gujarat. The doyens of Gujarati literature have themselves acknowledged her genius and genuineness - she carried to the literary domains the legends of tribals and outcastes, about whom, even Gandhian activists shied away from writing. Literature, after all, was an elite, and puritanical domain. However, Marija Sres put in the effort of not only learning Gujarati, but also finding a subject of writing which won her the prime regional literary award.

At a discount fair organized by Zubaan, I came upon this really interesting title - "First Their Was A Woman, and other stories". Slightly subversive, or dreamily assertive - I could not decide. Centuries of religious instruction would have ingrained in us the secondary-ness of a woman's origin. God first created Man, isn't it? The lore of Dungri Garasiya Bhils would differ. The unique ring of this narrative does not end here. Not only did their existence begin with a woman - the procreation and continuation happened without the presence of man. In fact, in the legends, wherever a man is mentioned, he is shown to be deceptive, or silly, or incapable of taking valorous decisions, unless prodded by the female. Such powerful depiction, that even the simplistic manner of writing jolted me completely. 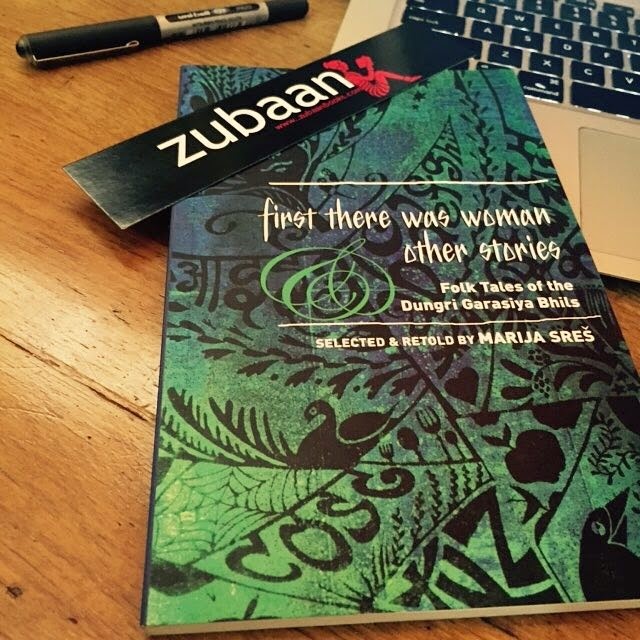 The all encompassing entity in the tribal culture is Kudrat, who is said to have created Pruthvi first - a female entity. Upon Pruthvi, Kudrat placed a lot of elements to beautify it. The first human to find its way to Pruthvi was a woman, painstakingly created by Kudrat as a Murti out of earth, carved and shaped unto perfection. She was called Sati (root word - Sat - meaning truth). The intrigue in this myth does not end here. When Sati found herself alone, while there were more of other kinds of species, she had an urge to procreate - and this she did with the help of Sapsi - a serpent, and not by desiring a male partner. The Pruthvi, thus, was a woman's kingdom.

Stories which form a part of tribal orature are not mere instruments of amusement. In them lie explanations for historical changes and sociological connections. In the story of Kava and Kavi, I understood how the naturally more vivacious and energetic female was slowed down using the treachery of beautiful garments and accessories, while she was caught unaware in the web of deceit concocted by male ego. The eternal nature of a woman's love was reinforced in the stories, and adequate light was also thrown on instances where a woman becomes a woman's worst enemy. This, as per my understanding, happens due to the rivalry that economic and social dependence on man bring about between females.

Because the tribal culture of Dungri Bhils, like most others, was animist since its ancient beginnings, a lot of supernatural instances find their way into the stories. People are gifted with the power of understanding the tongue of animals, and the source of vitality for humans resides in natural elements too. I have a feeling that the hierarchical structure, if any, in these societies would be - Kudrat (Invisible entity), Nature (Visible power), Woman, Man, and rest of the creatures. In a story about crows, the Queen is shown to be assertive and cunning enough to guide her King towards a right decision. In the only story where a King is the Supreme, he is shown to be unreasonable and silly. Snakes and Cobras have been depicted as benevolent and protecting species.

My favourite stories in the book are two -
1. Bhaliya and Priya - a love story, which talks of oppression by the King, and then dark, covert revenge by the lovers. Love is the vital force which oppression cannot mess with for long.
2. Alkhi and Dhulki - a story of sister love, which presents an alternate version to the beginnings of Sati.

India is a land of such diverse and glorious folk-tales! The more one delves deeper, the more is he surprised with the kind of degeneration that has affected our morality and belief systems. Harking back to animist and tribal traditions is always enriching and endearing in a shocking sort of way. And sometimes, it needs the eye of an outsider to locate stories in a patch of ourselves we forget to acknowledge and appreciate.

Marija Sres' book is an easy 4 on 5 stars. Thanks to Zubaan for bringing forward this wonderful book to an urban audience.

Posted by Saumya Kulshreshtha at 3:51 PM