'I like my new cellphone, my laptop works just fine,
My iPod is perfect, but Lord! I miss my mind!'

We could call our era the information age or the technology age, but beneath that jazzy veneer of words lies a dull flipside, or so the sceptics would have us believe. Some say that to information overload we have lost our brains. Some more will tell you that technology is aiding the advancement of machines and the backwardness of humans. Is it really true that with each passing moment, technology, which was meant to serve mankind, is actually enslaving us? This is the premise at which Parthajeet Sarma begins his confabulations with 21st century technology, though his investigations do not remain confined to this realm. 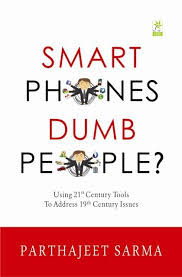 In a very promising prologue, which is what essentially encouraged me to pick up this book called 'Smart Phones Dumb People?', Sarma gives a glimpse into how computer programmes are now responsible for programming the human brain, which in certain situations loses its receptiveness, spontaneity and ingenuity. This prologue is where Sarma begins his foray into a world of opportunities, which is also a world of great paradoxes, because while for many of us, upgrading cell-phones is like buying the new, latest, attention-catching toy on the shelf, multitudes languish without basic amenities for sustenance.

Sarma structures his book well. He has divided his analysis into five parts, laconically and effectively titled - Innovation, Technology, Entrepreneurship, Priorities and Corruption. It is kind of a serial build-up of thought, through which Sarma leads his readers, so that they well understand the challenges of contemporary times, and are also acquainted with the best tools and procedures at hand to combat them. Sarma himself is an award winning innovator and entrepreneur, so his insights are those of an insider, and not a mere observer. He doesn't follow a very lofty trajectory in the book, because the issues and concepts he is dealing with a very basic - in consonance with the bottoms-up approach he seems to be a staunch believer in.

"Smart phones, dumb people? As gadgets take over our lives, have we become less intelligent?" - this is the problem Sarma lays down, and who would not begin at smart phones and social networking to postulate how greater advancements have led to greater decline in personal relationships, emotional stability and mental capacity. However, Sarma is quick to counter his own statement by asserting that the human brain has not lost its capacity in the past decade - if anything, it has become smarter. And this is evident in the number of innovations that are being churned out by enterprising young individuals. The issues across ages have retained some common features, only now, we have better tools and a better set of minds, which combine innovation, entrepreneurship and technology, to address them.

In a crisp and rather brief commentary then, Sarma gives few case studies and statistics to elucidate his stand. In the chapter on priorities, Sarma foregrounds all the challenges a country like India faces, and to what extend they can be resolved by extensive and comprehensive use of technology. He throws light on existing government policies, as well as the desired ones which can facilitate a more salubrious climate for entrepreneurial ventures to raise their heads. In the final chapter on corruption, Sarma takes up the greatest impediment which a large and diverse country like India has to fight at so many levels to come up with a credible growth momentum and strategy. You might just be motivated to build business models as a plausible answer to address governance issues after reading this one.

The book is an elementary reader into all the five sections mentioned earlier on. If you are someone who has even been remotely associated with start-ups in your professional or college life, there is nothing this book will tell you that you do not already know of. What it will do, however, is that it will string together strands of thought which otherwise lie scattered. Its a rather short book; will not take more than a day to complete. Do not buy too much into the title, which is a little deceptive, if I might say. The book does not come across as a criticism of technology, but rather as one which problematizes the halo around technological inventions, and then takes a stand before the argument is suitably built up. For readers with not much knowledge, but certainly an aptitude in this direction - especially those looking to construct their own start-ups and indulge in a bit of entrepreneurship (social, or otherwise), this book might be a good place to start at. Despite not containing any path-breaking, or enlightening thoughts to illuminate my mind, I think time on this book was well spent for the way it channelled my thought. A 2.5 star read for me.

Posted by Saumya Kulshreshtha at 2:50 AM