The Newsroom Mafia by Oswald Pareira- A Review

Is there a genre of fiction that can be called a masala thriller? Or a bollywood thriller? Well, if there were one, then Oswald Pereira's debut novel would effortlessly claim the golden throne among the list of books belonging to this category. What a read! 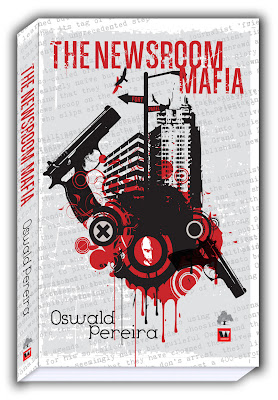 The Newsroom Mafia is a journalist's take on the crime syndicate that thrives in the dingy alleyways of Mumbai. Veteran journalist Oswald Pereira has woven a sensational story around the politics-underworld-media nexus which is routinely camouflaged, but which we all already know too well about. The excitement I felt while turning the last pages of this book is wanting to pour out in what will end up being an all out positive review of the book, but a synopsis is more than necessary if I am to express with lucidity why the reader inside me is so thoroughly satiated with Pereira's ingenuous screenplay-like-novel.

Narayan Swamy is the typical image of a Mumbai underworld Don, who self indulgently likes to be addressed as the "Godfather"- incidentally also his favorite movie. He is his own hero- a self proclaimed Robinhood who is the savior of destitutes languishing without any concern or empathy from the authorities. Our Don is a wannabe social worker, with, ironically, a criminal acumen so strong that is successful in transforming him from a deprived nobody to an A-listed celebrity in the power circles.This crime messiah prospers under expedient partnerships with influential politicians, legal and financial advisers, and media honchos doubling up as his investigative sources. Thus completes the perfect character of our Don- the mighty, invincible supervillain.

Enter our hero- Supercop Donald Fernandez, Commissioner of the Mumbai Police Force, 'second only to the Scotland Yard'. He is a genuine, but publicity hungry cop, stories of whose bravery are routinely splashed across the front pages of India's most widely read English language news paper- The Newsroom. This titular newspaper's star crime reporter, Oscar Pinto is Donald's favored media partner- who gets all the exclusive crime scoops right from the supercop's lips. The story begins with a false front page report in The Newsroom written by Oscar about Don's arrest by Supercop Donald Fernandez. But all hell breaks lose when the news spreads that Don has escaped before the Mumbai police could even sniff his scent. What follows is an all out war declared by the Supercop on the Don- a chase ridden with deception, seduction, betrayal, power games, conspiracies, cold blooded murders and most importantly, paid and planted media reports where the pen does more damage than swords could possible wreck.

Though the book promises a lot of drama, the author has done a fine job of excluding any unnecessary theatrics and sticking to the story which progresses at a thrill inducing speed. The crafty storyline keeps you guessing and each  page you turn brings with itself a new twist which makes it almost impossible to not turn the page again and be caught under the charms of a similar twist. The characters are straight out of some bollywood-rather tollywood screenplay described to such perfection that you end up making mental pictures of them which runs like an animated display as the plot unfolds. What works most for me is the earthy, crude narrative- an almost no nonsense exposé of the mechanics of crime syndicate as it operates in our country. The precision and the details provided keep the story real, but the spice element is not in the least compromised upon. When the cover predicts for you a foray into the sleazy and murky Mumbai Underworld much like a movie poster, your hopes already dart through the sky. Pereira does not disappoint at all with the expectations he keeps building up throughout the book.

As the plot thickens, the battle between the Don and Supercop becomes 'nerve-tinglingly' entertaining with dirty power politics and sleazy tactics being played in from both ends. How the fourth-estate, the media lusts after dollops of exclusive reports has been articulated with an insiders expertise. Also, the extent to which news is manipulated to serve not the interests of its own industry or of its readers but to pander to the insidious motives of the money backed, power hungry politicians and criminals puts your faith in the real life newspapers in uncertain waters. The novel is set in 1980s when the underworld had begun pullulating with concomitant maledictions like bootlegging, prostitution, money laundering, smuggling, power politics finding roots in the fecund Bombay climate. The anachronistic setting is too perfect to make each line of the novel seem close to inspired from reality.

I could go on, for there are so many elements still left in the book which excite me as I remember them. However, I will restrain myself to only mentioning my favorite among a bevy of more than a dozen characters as I end my post. Stella Kutty- a journalist draped in crisp cotton sarees, whose modesty is betrayed by the lurking sensuality behind all the covers is the perfect doze of seduction in story. She is the mysterious woman with an irresistible appeal who is the most potent weapon in Don's arsenal when needed.

I am hoping for a sequel. Or at least some more books in this relatively unexplored genre. Its 4 stars on 5 for me. Very strongly recommended!

(Reviewed on request from Grey Oak-Westland)
Posted by Saumya Kulshreshtha at 4:08 AM